Batsfjord, March 2014. Never before had the days leading up to a bird photography trip been so bad; a week before leaving a piece of my tooth broke, then I stubbed my toe and after that I burnt my back in an infrared sauna. To make matters worse, the route app of Norway I had installed on my phone didn’t work and last but not least I got a nasty pain in my lower back which also through my left leg…

It was hard to keep my spirits up, especially as the last fact wasn't promising in the least. Fortunately Titus, my physiotherapist, had given me the green light to travel and a fellow photographer, Han Meeuwsen offered  to carry my suitcase. A much needed stroke of luck.

At Schiphol Airport I also met Hans van der Griendt and the Englishman, Adrian Langdon. The trip to Kirkenes ran smoothly and my back kept well. In Oslo we had to wait for a couple of hours but that wasn't a problem as we had a lot to discuss, especially about the topics ‘birds’ and ‘photography’.

On Facebook I saw a first winter Ivory Gull was discovered at the harbour of Nesseby; which was incredibly lucky, because the next day we would pass that location on our way to Batsfjord. After arriving in Oslo I saw a voicemail message on my phone. It was a message from the car rental: I had to confirm my car-reservation within two hours, otherwise the car would be given to someone else. I managed to call back and avoid trouble just in time and we arrived in Kirkenes without any hiccups.

We picked up our car and drove off to our accommodation address, about 500 meters from the Russian border. The temperature over there was minus 19 degrees Celsius. 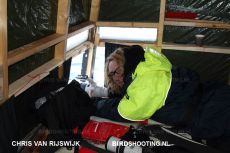 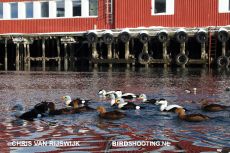 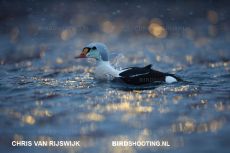 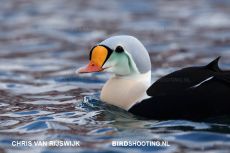 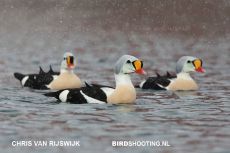 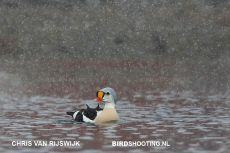 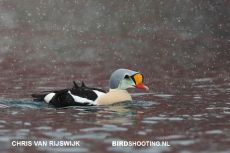 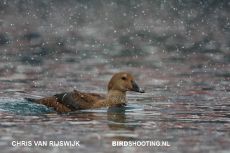 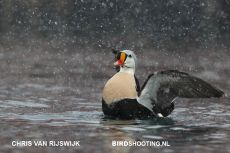 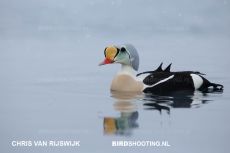 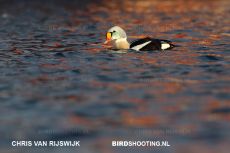 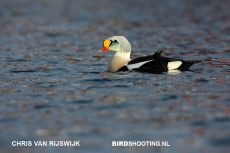 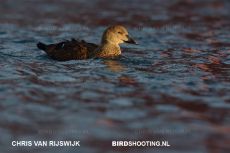 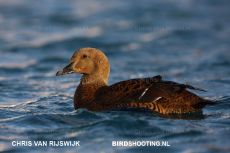 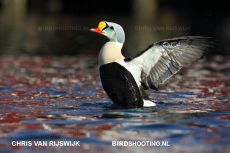 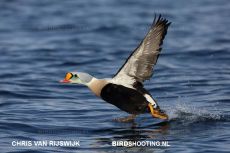 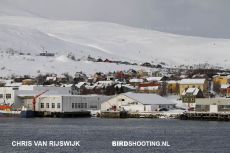 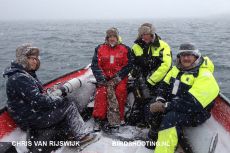 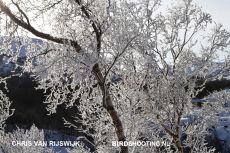 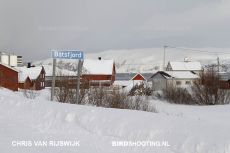 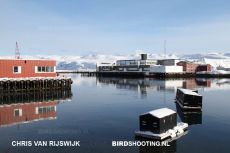 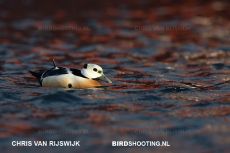 On the first morning we had breakfast at 7:00h and left to Nesseby. Unfortunately we didn’t find the Ivory Gull over there. Just my luck! It was low tide and the bird would probably be foraging in the reclaimed parts. We drove through to Batsfjord, across the Gednje plateau. What a beautiful place! Snow as far as the eye could see! It looked like a white desert. And to think that in June Dotterels, Snowy Owls and Long-tailed Jaegers will breed here!

After arriving in Batsfjord we soon saw some of the first King Eiders, Steller’s Eiders and Long-tailed Ducks. In addition we also came across a few immatures and an adult Glaucous Gull, and as the icing on the cake, an adult Iceland Gull! We checked in at the Polar hotel, drove around a bit and shot Kittiwakes guarding their snowy nest (at least they are early enough to protect their nests). We later did some shopping and went out to get some shooting done. It was just around minus 8 degrees Celsius but the wind made it feel colder; fortunately I had enough warm clothes with me.

At 18:00h we had a briefing by Orjan (the owner of a King Eider photo hide)  about the next day. We made an appointment at 4 o’clock in the morning to drive by boat to the floating hide. I’m excited!

Next morning we were up at 4 and ready to leave with a fast boat to the hide. The guide threw dead fish into the water, which sank to the bottom, in front of our floating hide. The Eiders took the bait. Besides the ‘ordinary’ Eiders, King Eiders and Steller’s Eiders and even Long-tailed Ducks were fishing. It worked out very well for taking pictures! It was a constant coming and going of ducks. The King Eiders are beautiful (just as the ‘ordinary’ Eiders are), they look like marzipan! I personally find their colours too loud, but in a way one can't help but find it appealing.

The float was comfortable, with sufficient space and equipped with some chairs and a toilet. The only thing was that it wasn't possible to stand upright. One of its best features were peepholes at lying height, which was ideal for shooting. At 12:00h we finished photographing, were picked up by boat and tried to take some final flight shots of ducks as our party approached port. Not the most ethical thing in my opinion but I won't complain, because I participated without any protest. At 18:00h we had a cosy dinner together and after that we went to bed, tired but satisfied. My back hadn't given me any futher trouble and that was wonderful.

At 4 o’clock in the morning we were up again and fully prepared for a day on our floating hide. I might have been tired the day before but after a good sleep I felt recovered and ready for more. Also a Finn and another Dutchman (Seraf van der Putten) joined us, making us a total of six. There was a lot of snow (40 cm in the morning!) and that gave the pictures something extra. That’s what I had hoped for! As I took my second cup of tea I noticed that my tea-bag was frozen, as was the egg I peeled. I wasn't feeling that cold; I took warm clothes with me and wore a heat pack Orjan lent me over it. Only my toes felt cold after a while; even my Sorels, which are fantastic, couldn’t prevent it. At 12:00h we were back at the hotel and at 13:00h we left by boat to take some more flight shots. Again it worked out nicely, although there still was snowfall, the autofocus did fine; I love my 5d mark III! At 15:00h we drove back to the hotel. The streets were swept, but with that amount of snowfall it didn't make much of a difference. We could barely tell where the road ended and the sidewalk began. In the evening we ordered a cheeseburger menu and after that we  went to bed very tired. What a day!

The next day the alarm went off at 3:30h, it was our last day on the float. The temperature was minus 12 degrees Celsius and breakfast was frozen before I even started it, but it didn’t matter, because we took beautiful pictures. Not as good as the day before (there is less snow fall and are less Eiders), but we enjoyed ourselves. A Belgian photographer also joined the group. We left a bit earlier (11:00h) and went back to the hotel, we had a lot of fun together as a group. At around 13:00h we went out to the harbour to tease the ducks (I can’t call it anything else). There is a lot of sunshine and unfortunately just a little wind, so we couldn’t predict which way the ducks would fly away. However I managed to take my best flight shots of a King Eider. At 15:00h we went ashore and had dinner at 17:45h. After that I called home by Skype. Meanwhile the others  got ready to watch the northern lights at night. I like the northern lights, but I felt no urge to shoot it during the night; at that moment a good sleep seemed much more enticing. Next morning we packed our luggage and drove through Nesseby (again no Ivory Gull) to Kirkenes. We took our time so as to take photos of the scenery, reindeers, churches etcetera.

On our last day, Han and I took a morning walk along the Russian border. We heard and saw Willow Tits and four Rock Ptarmigans in winter plumage took wing. The sun was shining and it all looked so wonderful! We drove off to the airport, returned our car and flew back via Oslo to Amsterdam.

And thus beautiful trip came to an end… 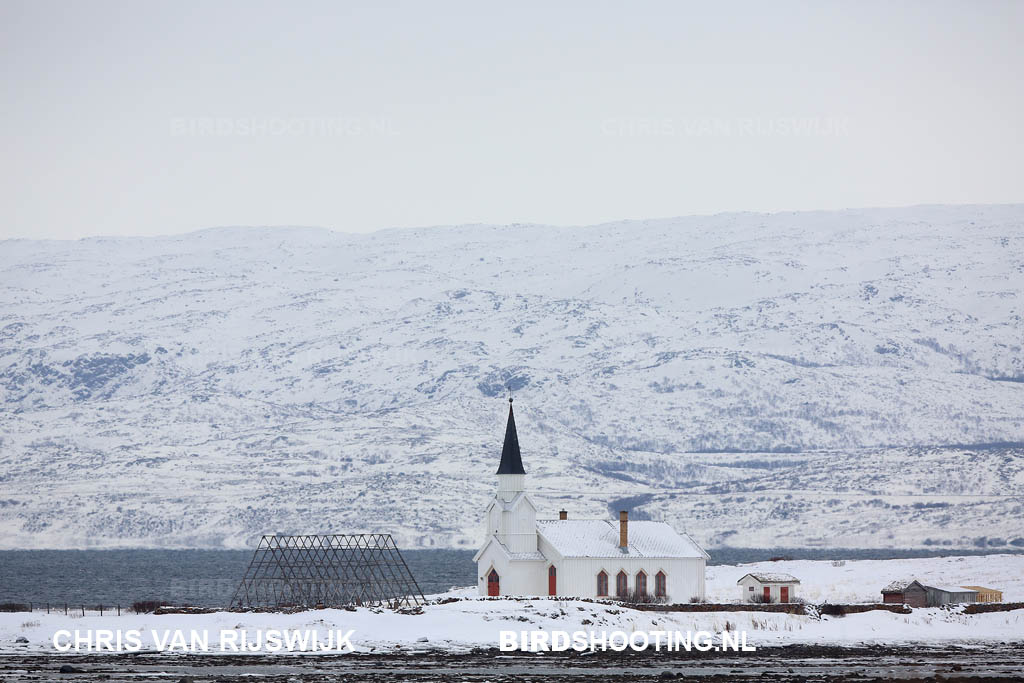